It was July in Barcelona and we could have gone to any beach to do the photo shoot for the cover of Clara for August. But for various reasons the photograph was done in the Hymsa / Edipresse studio. There you can have a complete control of the light, but the difficulty is almost always the same in the photos …They seem made in a studio! 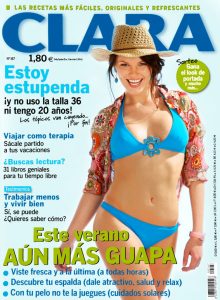 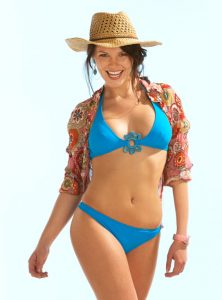 The idea was for the photo to look like it had been made on the beach and therefor the main light had to be like the sunlight on a sunny summer day, without clouds. Sunlight is very harsh unless it is filtered through a cloud or if it is a cloudy day. Outdoors, heaven helps lower the contrast of light produced by the sun and fills the shadows, but in the studio this contrast is higher and has to be carefully controlled.

As main light we used a Bowens 1500 W/s flash with a Maxilite reflector and the result was great. It was important that the main light was hard, and a flash with a standard reflector – as is the Maxilite – situated far from the model it becomes a small light source and generates a harsh illumination, without gloom, and is wide at the same time .. 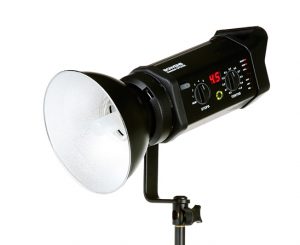 I could have used another more efficient type of accessory like a reflector with a Fresnel lens but it was being used in another set and hence I could not dispose of it. 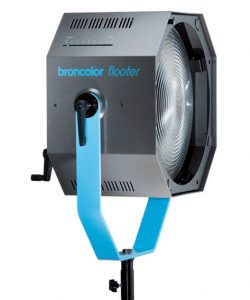 These accessories make the light beam of the flash look as the sun by using an optical element. This causes that the rays of light – instead of dispersing – are projected parallel.

The Shape of a parabola

It was only a matter of positioning the light in the right place and that way we would have a very direct and hard light. But we did not have this accessory in the studio!

It would have been even better having one of the fantastic parabolic umbrellas from Briese, but the budget was limited and few studies in Spain have this fantastic German brand. 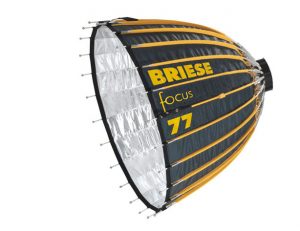 Because of their parabolic shape, these accessories allow that the distribution of the rays is parallel (in theory) and thus resembles the sun. I will speak about the Briese accessories in another post because it’s design is spectacular. The effect it produces is like the one of a Fresnel with a very spectacular light, and at the same time very enveloping.  Amazing and true!

Let us return to the studio to see how the illumination for the set was done. A Wafer Strip light box acted as secondary light to decrease the contrast caused by the direct light from the principal flash, and it was put at a rate of – 1.5 EV. The background was overexposed + 1 EV so that the blue gelatine in front of the flashes that were illuminating the background would burn it a bit. This was to decrease the saturation of the blue color so that the background color would seem more celestial, like the sky.

In the previous post I explained how, from a technical point of view, the Image Fulgurator had the same function as a spot light, like Zoom Spot 18-135 or a Mini Spot Lite, both from Elinchrom.

The special features of these accessories is that they have an optical part – lens or condenser – that allows that image located between a strobe and the optical part, to be projected in a background. These metallic parts that can be put between the light and the optic, are called Gobos (Goes Before Optics). There is quite a large variety of options that can emulate venetian blinds, foliage, and stars, among others.

On one occasion I used them on a photo shoot for Clara magazine. It consisted of making a cover on Araceli Segarra, followed by an illustrated article that could be the first of a series of covers, dedicated to prominent women in different professional areas.
The ambience on the set shouldn’t have to have too many elements because any of the pictures could be considered a possible cover. There had to be enough empty space to allow for text and headlines.

It had to look like it was a wide space with natural light. To achieve this, we used a Wafer big softbox with a Bowens 1500 strobe and the contrast was decreased with three big expanded polystyrene reflectors (Porexpan®, Telgopor®, Styrofoam®, Frigolit®, etc). A big white umbrella was set above the camera, exposed at -1 ½ EV below Wafer softbox power, to light up Araceli. Finally, an Elinchrom Zoom Spot 18-135 adapted to a Bowens’s bayonet was used together with another Bowens torch at 1500 W/s. A gobo with the image of a venetian blind was placed on to the spot light.

The shot was taken with a Kodak slide film EPP100. In the analogical world a correct exposure and the power ratio correspondence between the strobes ,was key because of the little latitude margin of the slide film, (error margin in the exposure). But also nowadays it is very important a correct exposure in order to the make the most of our raw files.

This assignment was for a feature on beauty and health, and it was shot by the pool of the Majestic Hotel in Barcelona. One of the pictures was to be considered a possible cover for the magazine.The covers for Clara Magazine are characteristically very clean looking, usually with a white background and wide framing to allow for text and headlines to be included.The story headline texts of most women’s magazines have to be on the cover, which unfortunately detracts from the picture.

We have to take into account that each magazine is a product addressed to a very specific public and therefore every cover has to fulfill all the requirements set by the management department. But I guess that every photographer’s dream is a less crowded cover, like Harper’s Bazaar or V.

Back again to our assignment – the difficulty in it was finding a white wall with enough available space to work comfortably. In addition, this cover had to be brighter than usual because it was summertime and it had to deliver a fresh look.
I found the perfect place on the last floor of the hotel and luckily there was a white sofa that I could use. We just had to move the furniture a little and shoot the cover.

Clara covers are usually shot with a neutral, low-contrast light that is neither too hard nor directional; which tends to be more natural.
To achieve this effect I used a couple of Wafer 100 light boxes with Bowens flashes of 1500 w/s plus a silver/white Lastolite reflector. However, on the left of the set one can notice a Window and a zenithal skylight. They have not interfered with the lighting since its light power is lower than that of the flashes.

The light box directed to the background wall, overexposes the surface and bounces off to the model reaching her hair slightly above the main light. The shots have later been exposed to 1/2 EV again above the main light to slightly “clean” the skin. This shoot was done with film and the exposure error margin in the slide EPP was critical.
I took a couple of Polaroid pictures to be sure that the light was under control.
Nowadays with digital sensors and histogram readings everything has changed. There is much less need to use a light meter! I am not sure that this is a good thing.

Once the cover was done, I shot the photos on beauty and health using natural light and reflectors (and a less prominent flash)

All rights reserved. © Isarrualde Photography. It is forbidden the use partial or global of this website unless authors written permission.