Bream is a fish with delicate meat, traditionally eaten in many parts of Spain on Christmas Eve. It can be prepared in various ways and it is an oily fish with low content of fat, ideal for light meals. 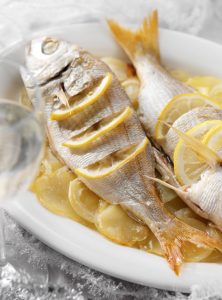 The idea of this story was for all the recipes – all of traditional making- to have a very clear and clean graphic image, and at the same time give a subtle  impression of a festive Christmas Eve dinner. 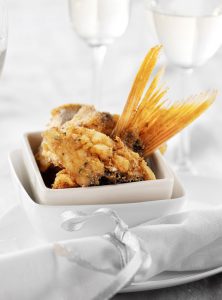 The prop was very white, and the glasses of wine – white as well – were accompanying the general mood of the shot very well . I wanted to accentuate the table, but make a close-up photo that made the attention go to the plate and not a wider and descriptive image that would take away the attention from the food. 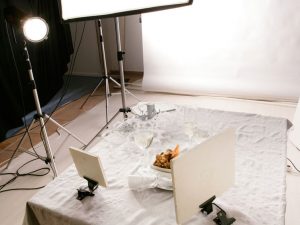 The initial lighting scheme consisted of a Wafer light box from Bowens as a back light and two white frontal reflectors which decreased the overall contrast of the scene. A white background, distant and overexposed completed the set of lights. 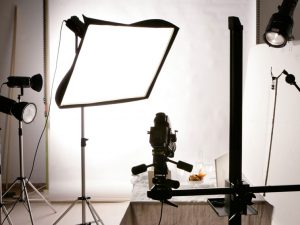 The article is called ‘Bream with tradition’ and it was realized for the magazine ‘Lecturas Cocina‘. It consisted of 5 recipes, each one with particular ingredients. This generated different forms, volumes and shine in the different plates. For every photography some modification of the light was necessary. Not changing the initial scheme,  but complement the scene with other lights. In some cases we used a reflector with a honeycomb or a cone, in others a Fresnel, or both simultaneously.